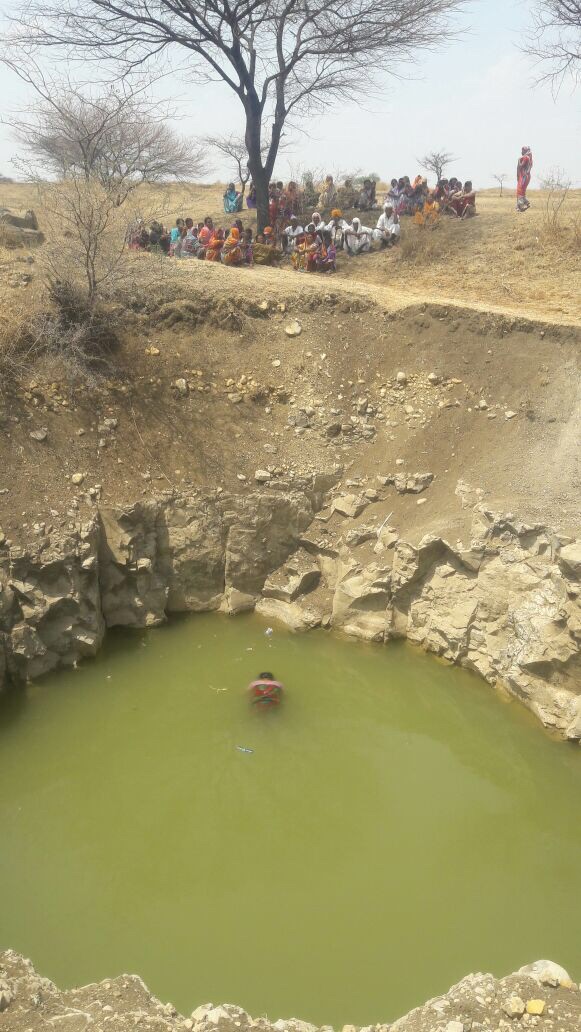 These days, both print and electronic media are mostly found flooded either by the news related to the drought hit regions of India or by an irritating advertisement of Arvind Kejriwal. So, what usually we do with those sort of news. We turn the page or change the tv channel preferably to read or see something, which shows little positivity about the nation. Trust me, we Indians have that tendency to turn our faces away from seeing the misery and we have an inherited feature to remain insensitive about whatever wrong is happening around us till the time it is personally not affecting us. It’s not only because of our deep rooted insensitivity, but also mostly because we lack to empathise with the sufferings of people in the same society in which we live.

Few days back I read a news related to a kid died of heat stroke while trying to fetch water out of a dying up well far away from his village. I felt bad and so I quickly turned the page to the sports news and started reading about Gujrat Lion’s glorious victory over RCB. Then, I went to the office and before I could switch open my desktop, I got a call from an unknown number. The girl on another side was claiming to be the part of some NGO and was pleading me to assist her financially to save a child suffering from cancer. I said sorry to her as I keep getting such phone calls. After putting the call, I asked the question to myself. Am I seriously getting insensitive and lagging behind in terms of humanitarian? The answer is no. None of us were born like that.

In fact, we Indians always loved helping each other till the very recent times. I will share one of my personal experiences, which can never be forgotten. In the year 2007, I went to Mumbai for the very first time as I had my joining for my first job. It was an early morning, say around 5:30 AM and it was still dark at that time. And on top of that, it was raining as well because it was the month of August :-). I had to reach a place named koparkherne  in Vashi. My cell phone got switched off due to drained out battery. The auto driver tried to assist me a lot in order to find out the house of the guy, whom I was supposed to stay with for couple of days before getting the accommodation by the company. I requested the auto driver to drop me to a bus stop assuring him that I will find out a way. After he left, I spent few minutes at the bus stop and then an aged person in his early 50s came over there. It was very easy for me to guess that he was an office going person waiting for his bus. I went ahead and told him my story and requested him to provide me his cell phone, so that I can contact the person I am supposed to meet. Without any second thought, he handed over his mobile phone to me and I was rescued. Try doing the same thing now after 9 years and I bet no one will give you their mobile to use however troubled you are. So, what actually has changed in all these years? The answer is very simple. Some people started taking advantage of the situation and did set a very wrong example for others. Thanks to TV serials like crime patrol 🙂 . Now, we Indians are hesitant to helping each other. We are afraid that we may not land up into a kind of bad situation by offering any sort of help.

We tend to blame the government that they are not taking care of people and showing insensitivity towards the people. But, isn’t that an injustice to ourselves to blame them? If we as a citizen prefers to remain silent seeing each other suffer, then why those politicians should even give a shit about our condition. That too when we have ourselves elected them to represent us. So, a dead society will always see that sort of politicians and dead representations for themselves. But, there is something beyond all that. Sometimes it is hard to believe that a nation like ours, which has gone through many social reforms in past is having such a crisis of humanity. Just a day before, I saw a picture of a swollen dead body of a women floating in a well somewhere in Maharashtra. She had gone to fetch some water for her daily needs and slipped deep inside the well. People around that well were waiting for some help from government body to take her body out, so that they can get their share of water. That picture was so heart breaking that I was not able to speak for sometime. A nation which is preferably called as ‘Bharat Mata’ is witnessing a mother’s dead body swollen and floating as a symbol of struggle against the crisis of water.